Professor of Anthropology and of Social Sciences in the College

My work lies at the intersection of Anthropology and Science and Technology Studies (STS), with commitments to social theories of capitalism and postcolonial studies. I seek to understand the political economy of the contemporary life sciences and biomedicine, with a primary empirical focus on the United States and India. My focus has been to open up conceptual questions concerning the complex relationships between knowledge, health, value and politics. I have a three-fold set of intellectual commitments: (a) to explore the nature of scientific knowledge, practice and institutionalization; (b) to elucidate political economic structures that operate across multiple scales using ethnography; and (c) to theorize contemporary capitalism.

My recent book Pharmocracy: Value, Politics and Knowledge in Global Biomedicine, elucidates the political economy of global pharmaceuticals as seen from contemporary India. I develop the term “pharmocracy” to describe the global hegemony of the multinational, Euro-American, research and development (R & D)-driven pharmaceutical industry. It alludes to the ways in which this industry operates to institute forms of governance across the world that are beneficial primarily to its own interests. The book follows the global harmonization of clinical trials and of intellectual property regimes in India in the mid-2000s, arguing that these two moves must be understood in terms of this expansion of multinational corporate hegemony. “Third World” national regulations are now being instituted to facilitate First World corporate interests in ways that have consequences for state policy, industrial competitiveness and public health. However, this capitalization is not without contestation. The book traces ways in which pharmocracy comes to be politicized in India through trajectories of judicialization and public scandal, even as it instantiates and establishes itself as hegemonic.

Previously, I wrote Biocapital: The Constitution of Post-Genomic Life (Duke 2006), a multi-sited ethnography of genomics and post-genomic drug development marketplaces in the United States and India that tracks the nature and manner of the co-production of economic and epistemic value in contemporary life sciences. I am also the editor of Lively Capital: Biotechnologies, Ethics and Governance in Global Markets (Duke 2012).

My most ambitious pedagogical commitments have focused on the development of an ethnographic methods curriculum for graduate students. I have been teaching Anthropological Fieldwork Methods for the past decade, first at the University of California, Irvine, and then at Chicago. I teach elective seminars in Anthropology and social theory around a host of issues relating to contemporary capitalism and knowledge formations. My investments in undergraduate teaching lie primarily in teaching within the Colonizations core sequence, in addition to teaching an introductory STS class as part of the Anthropology major.

2015
Trans-formations of Biology and of Theory. In D. Boyer, J. Faubioin and G. Marcus, eds., Theory is more than it used to be. Cornell University Press.

2005
Subjects of Speculation: Emergent Life Sciences and Market Logics in the US and India. American Anthropologist 107(1): 19-30. 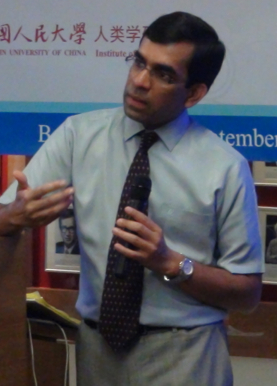